News | JUST - Join Us and Study

A language course as a springboard to study

A group of refugees take part in a German course at the HWR Berlin in the winter semester 2018/19. The course is part of the “JUST – Join Us and Study” programme. 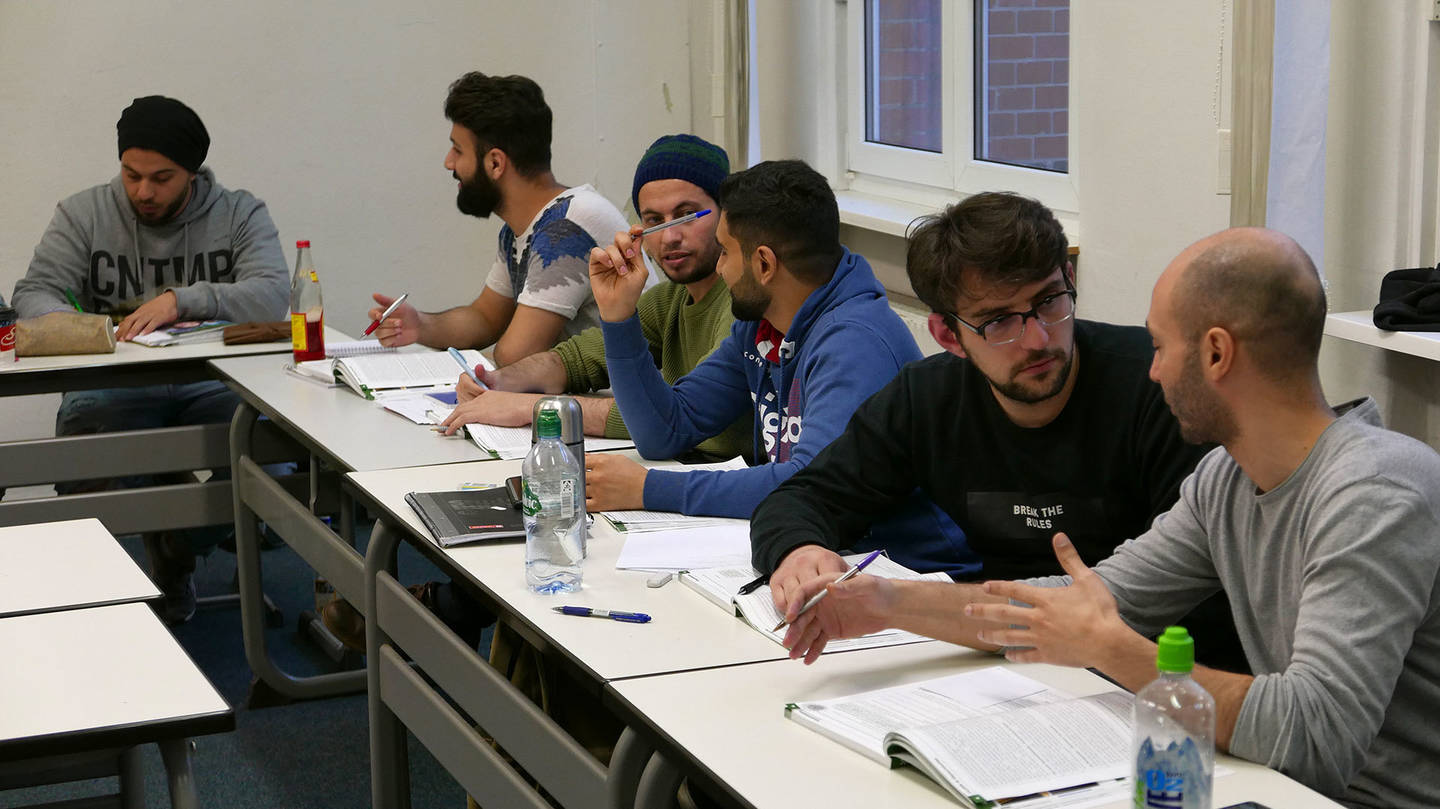 “What springs to mind when you think of German history?” Martin Ortega is drawing a timeline in green marker pen on the whiteboard where he is going to record the most influential events in 2000 years of German and European history. The answers come quickly: “World War II, guest workers, rebuilding Germany after the end of the war” - those are the first thoughts that Mohammed Kadi comes up with on this wide-ranging topic. Martin Ortega agrees – even though the order of events is not entirely correct. The teacher makes only passing reference to the fact that the first migrant workers, known as guest workers, did not come to Germany until the late 1950s, after most of the rubble had been cleared and the boom years of the economic miracle were already well under way. Kadi works the answer out for himself - in virtually fluent German.

The historical digression is part of a lesson that forms part of the Intensive German Course for Refugees that is currently running at the HWR Berlin. The sixteen participants learn German in twenty-five lessons per week over a period of two months. The demands are considerable, as the language skills of the young people, all of them from Syria, have reached a high level by this stage. Many of them fled to Germany some years ago from homes destroyed by war and had to build a new life in Berlin one step at a time. They have all successfully mastered language courses, so now the next hurdle to be tackled has to be the intensive course at C1 level.

One goal firmly in mind: studying

It’s difficult, says Sandra Haji. The 29-year-old comes from Qamishli in the northeast of Syria and has been living in Berlin for five years. Even though she advises other refugees at the Evangelisches Jugend- und Fürsorgewerk, a Protestant youth and welfare office, on finding accommodation and even though she also volunteers for the local food bank Berliner Tafel, she finds the German course tough going. But she has one goal firmly in mind: “I want to study. I'm just not sure which degree programme I’m going to choose yet”.

The courses offered by the HWR Berlin give refugees the chance to prepare for studying at university. Free German courses are available as part of the “JUST - Join Us and Study” programme. Interested students can also choose from various courses and classes in the general extra-curricular studies programme. Andreas Hirsch-Landau, who coordinates the programme at the HWR Berlin, reveals that courses to help prepare for university are also available: “An overview of the German higher education system, the very wide range of subjects that is often available, and assistance with applications are all topics for which we’ve put aside a few hours a week to go through”. The German course is funded within the DAAD INTEGRA programme by the Federal Ministry of Education and Research (BMBF).

Tarek Alsafarjalani already has a foot in the door at the HWR Berlin. The 26-year-old has enrolled in the Bachelor's degree programme in Business Administration. At the moment, he is working hard to gain the C1 level required to enable him to take up his course at the HWR Berlin. Achieving this level will give him the externally verified standard of proficiency in the language. Mohammed Kadi also wants to reach this level in the near future. His plan involves Business Information Systems, but he hasn’t registered yet. The young man from Aleppo has a strong foundation for passing the demanding German course: in 2014, immediately after arriving in Berlin, he began to learn German, followed by a two-year stint as a consultant at a financial institution. Kadi also trained as a lifeguard. The only thing left for him to sort out is his knowledge of post-war German history.